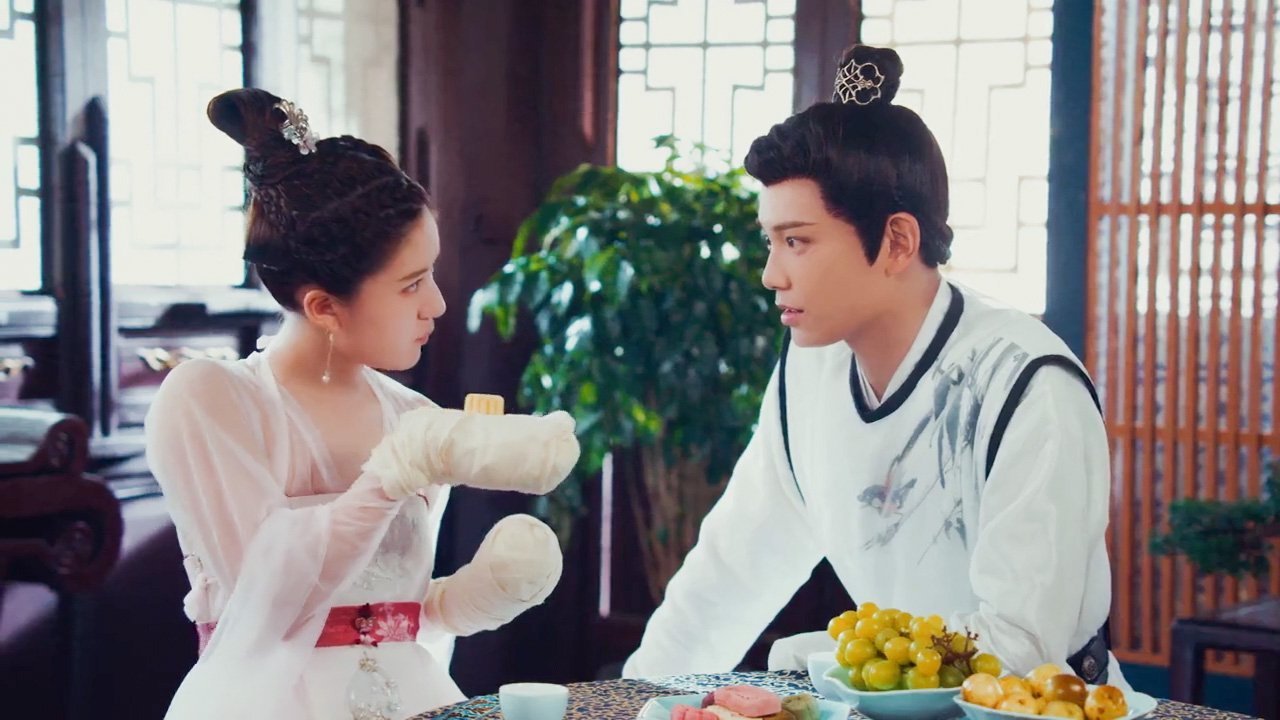 I absolutely adore C-dramas to the extent I rarely watch any other shows or dramas. People always ask me what Chinese dramas they should watch but I can never think of one at the moment for some reason.

This is why I decided to create a list of dramas I would recommend and why I like them. The rest of the month will be dedicated to my favourite Chinese dramas. It will be a 4 part series with each new post coming out on Thursday (when I usually post anyway). Originally, I wanted to write one blog post about my top Chinese dramas but soon realized I couldn’t cram that much in. Also, I love each drama on the list so much and want to give each one proper attention.

I am pretty specific with the dramas I watch. I have a lot of factors to consider before watching one and would ask myself the following questions:

These are all dramas I have re-watched multiple times and it’s in no particular ranking. Warning: there will be minor spoilers ahead. READ AT YOUR OWN RISK.

I debated whether or not to add this drama to my list. It’s one of those shows that everyone has heard about because it’s that famous. To be honest, I didn’t LOVE the dramas compared to the other ones I will talk about but this drama was what got me hooked on Chinese dramas. 9 years later and I’m still addicted so it’s safe to say, Palace has a special place in my heart.

It’s about a girl named Luo Qin Chuan who is from the 21st century but travels back in time to the Qing Dynasty. She has to navigate palace life and gets caught in a love triangle between the eighth prince and the fourth prince, the future Emperor.

Feng Shao Feng (冯绍峰) played the main actor as the eighth prince. He was great at his role. He was boyish, charming, handsome (to some people), and had great chemistry with the main actress, Yang Mi (杨幂). If you like watching a couple bicker/banter, you will like the interaction between the two. I certainly did. Feng Shao Feng was like a little boy not knowing how to deal with his crush on a girl. He kept teasing Qin Chuan. I like Yang Mi as Qin Chuan. She suited the character well. She was feisty, headstrong, and loyal.

The love story between Qin Chuan and the eighth prince was what kept me going and my favourite part of the story. However, there were too many scenes that are too similar to another drama called Meteor Garden. If I wasn’t such a fan of Meteor Garden, I wouldn’t have noticed that the similarities. There were some differences between the two since Meteor Garden is a modern drama and Palace is an ancient drama but it was still very obvious.

The drama was so successful that there were a few sequels (two dramas and a movie) after this. I didn’t watch them because I didn’t love the drama enough to keep following the stories. They also changed the main actors so I was like meh. As for the lead actors, this drama catapulted Feng Shao Feng and Yang Mi into stardom despite each having dozens of work under their belts already. This popular pairing partnered up again multiples times after but their other dramas never surpassed the success of this one.

Even a song from the OST (original soundtrack) was successful. Chinese dramas have this habit where the lead actress or lead actor sings a song in the OST. Yang Mi sang a song called the offering of love (爱的供养) and till this day, this song is now one of the most recognized Chinese songs. Listening to the song makes me nostalgic. It reminds me of simpler times.

If you have heard of this drama, likely, you’ve also heard of a drama called Scarlet Heart. There is always a comparison between the two due to similar plots. Scarlet Heart is another time travel romance drama where the lead actress is from the 21st century and gets thrown back to the Qing Dynasty. If I had to pick between the two dramas, I would pick Palace. Scarlet Heart was mediocre and too sad for me but the main leads have good chemistry. In fact, they are married in real life. How adorable! If you like time travel romance dramas or palace dramas, you should watch both of these.

P.S. if you’re trying to look up this drama to watch online, you’ll probably notice that the video quality sucks. To me, 2011 doesn’t seem that far away. I can’t remember if the video quality was that bad back then but I must be too used to watching videos in HD now.

2) Romance of Tiger and Rose 传闻中的陈芊芊

This one just finished airing recently and I love this drama so much I had to include it on my list.

The synopsis is interesting because Zhao Lu Si (赵露思) plays a screenwriter that gets sucks into her own story except she’s the third princess, a character that is supposed to die early on! I laughed when I first read the synopsis because you would think the screenwriter would be the main female lead and not a side character. I was immediately intrigued.

The lead actor, Ding Yi Xi (丁禹兮) plays a crown prince named Han Shuo from a rival city. His city is a typical patriarchal society where men hold power. Zhao Lu Si aka Chen Qian Qian is from a city where it’s the complete opposite, where women hold power. One of the reasons this drama got so much attention was because there are not a lot of historical dramas where the setting is a female-dominated society. People were probably interested to see how the drama would play out, including me.

I am in LOVE with Ding Yu Xi!! He’s a relative newcomer to the entertainment industry and is only 24 years old. Ding Yu Xi may not have a traditionally handsome face but something about his looks draws the audience in. Hey! Who doesn’t appreciate some eye candy on screen?! Any KPOP lovers here? Comments were saying Ding Yu Xi looks like Taeyong from NCT. I can see the resemblance.

The lead actress, Zhao Lu Si should be a familiar face if you like historical dramas. I had higher expectations from her because she has more acting experience. When it came to acting performance, I preferred Ding Yu Xi. Zhao Lu Si has potential but she went overboard in some scenes with her exaggerated acting. Maybe it has to do with something with her not going to an acting university? (A lot of Chinese actors and actresses come from one of three prestigious acting schools in China: Beijing Film Academy, Shanghai Theatre Academy, or Central Academy of Drama.)

I usually avoid comedies even if the drama falls under the historical romance category because I don’t get their humour. The humour in this drama was somewhat my taste. I laughed along especially at the parts where Zhao Lu Si tried to set up Ding Yu Xi with the original female lead, Chen Chu Chu. Unsurprisingly, it doesn’t go the way she expects. Other times, I had a complete poker face in an otherwise funny scene. If you’re used to watching more Westernized shows, you might be like me when it comes to understanding their humour.

However, I love the storyline between Han Shuo and Chen Qian Qian. Usually, it’s the girl who likes the guy first but in this drama, it’s the other way around. He was extremely devoted to her. It was so romantic and I loved it. Ding Yu Xi’s character has many sides to him (sweet, romantic, serious, heroic, scheming), which I thought he played them well. Han Shuo has SWOON-WORTHY moments. The two main leads have good chemistry and have sweet moments spread throughout all episodes.

This drama was very successful after airing. Ding Yu Xi is China’s newest rising star. He’s just going to gain even more popularity later on, mark my words. I’m looking forward to his future works and am praying hard for a season 2 with the same actors. Fingers crossed! It won’t be the same without them. I heard that fans have been bugging the director so much for a season 2 that he said yes! Not sure if it’s just a rumour but if it is, it’s spreading like crazy. I saw comments and it seems like people want season 2 in modern society but I still prefer the historical setting. I’m a sucker for those!

The drama had me hooked on the first episode. Some dramas have a slower introduction. It is only after watching a few episodes before the story will take off. This isn’t one of them. It’s fast-paced and only 24 episodes long. If you know anything about Chinese dramas, they’re usually pretty long. This is a perfect drama to watch if you’re looking to watch something shortish historical romantic comedy.

This is a lower-budget production so don’t expect to be amazed by the scenery and CGI. The plotline and the love story between Han Shuo and Chen Qian Qian will keep you engaged as an audience member. Overall, I would describe this drama as simple, fluffy, and light-hearted. Even the OST sounds sweet. Dance of the Sky Empire is another drama I would recommend if you like this type of stuff. It’s short, sweet, and has a pretty straightforward storyline.

If you haven’t watched the Romance of Tiger and Rose yet, go watch it! I already know I will be re-watching the drama at least several times.

There are more than 2 dramas on my list of top Chinese romantic dramas, I promise! I will have several blog posts because there’s no way I can fit everything in one blog post. Part 2 coming out soon!

My favourite Chinese drama in 2020 must be Love and Redemption. I love it so much that I dedicated a review just on this one drama.