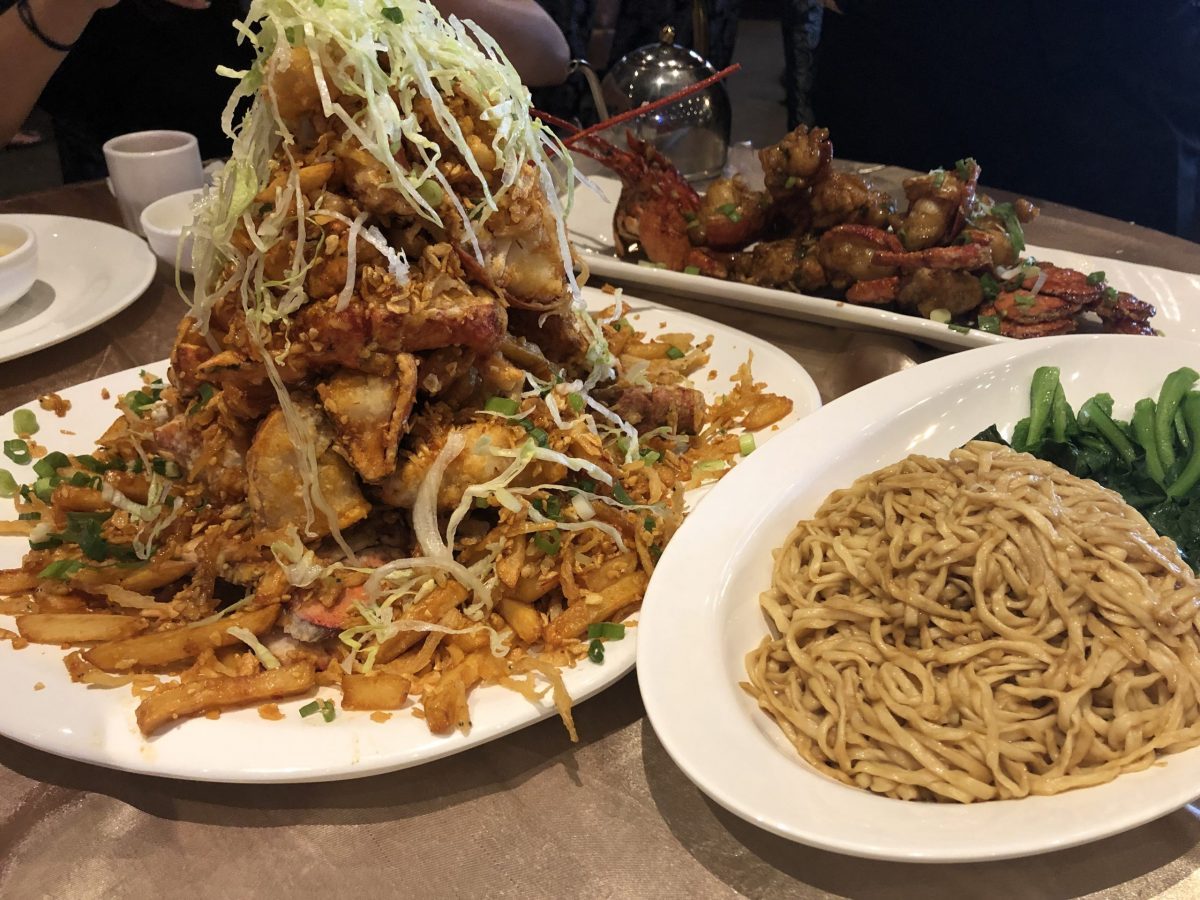 If you’re looking for a restaurant that has good lobster, boy, do I have good news for you. Anybody who has been living in Toronto for years that’s Chinese has probably heard of Fishman Lobster Clubhouse. They are known for the signature lobster pile dishes. In fact, there are almost 4,000 reviews on Google. I’ve been coming here for years. When we went there to eat at 2 pm, we still had to wait 15-20 minutes so this will give you a sense of how popular the restaurant is. We ate here after going to the Terre Bleu Lavender Farm.

You can select what you want to eat from a bunch of menus when you enter the restaurant. Regulars usually go straight for the lunch/dinner combos. In most meal combos, there is soup, vegetables, lobster, main dish/seafood, and dessert. If lobster isn’t your thing, there are also crab towers but I always go for lobster. I mean, it’s called LOBSTER Fishman clubhouse.

The restaurant has different ways of cooking it. My family and friends like the HK style (fried lobster pieces with fries and dried anchovies). (Hint: if you like ketchup with your fries, I suggest you bring your own. Last time, I asked for ketchup and was disappointed to find out they don’t have any. I know I look weird bringing my own condiment. Even my friends were laughing at me but a girl likes ketchup on her fries, OKAY? Good. Moving on.)

For those who know me well, once I like something, I basically always stick to it but my friends recommended getting the Maggi sauce so we did. I’m glad I did because I prefer Maggi sauce now. It has more of a soy sauce flavour. If you’re someone who likes sauce on their lobster, I would try Maggi sauce. If you like your lobster dried/fried, I would try the HK style since that’s what most people get.  Don’t get me wrong. Both were good and the lobsters were fresh but there is a clear winner and it’s the Maggi sauce. The only downside I would say is that with the Maggi sauce option, there are no fries.

After ordering, the waiter comes by to show you the live lobster you will be eating. It’s somewhat normal for Chinese restaurants to do that so that customers can see the freshness of their food. Here is an opportunity for photos. Every time I come here, I see at least one table holding up the lobster and taking pictures. Don’t worry, the restaurant has a rubber band around its claw so you won’t get hurt.

To start the meal, they serve you soup. I don’t like soup, let alone creamy corn soup so I passed my portion to my friend. I like my vegetables cooked with garlic or oyster sauce but the vegetables here are poached so I wasn’t the biggest fan. However, there is already a lot of flavour in their main dishes so having something more bland balances out the taste.

When the lobster tower comes out, it looks very appetizing. The restaurant cuts the lobster up into pieces for you but you have to still de-shell each piece. It’s not that bad since they provide gloves but it would be more convenient if they did.

I’m one of those people that like my rice plain but I approve of their fried rice here! It’s one of my favourites at this restaurant. Normally, I like eating e-fu noodles at Chinese restaurants (there’s a restaurant I especially like for their lobster e-fu noodles) but the noodles here didn’t have much taste. By the time the noodles came out, we were almost halfway done eating our tower so the taste was overwhelming in my mouth.

For dessert, the restaurant gave us three macarons (two vanilla and one lemon). Vanilla macarons are my favourite so I ate them both. They were alright although the macaron shell fell off of both. If you’re a macaron connoisseur, you would definitely not be satisfied. If you’re not that picky with desserts, it will do.

So what are my thoughts? This restaurant is not for solo eaters. I would suggest going with at least three people so you can have a variety of food. If possible, I would go with even more people. I think it would be beneficial to note that at this you pay by pound for the lobster/crab. It’s not a set price like a lot of other restaurants. The price will differ depending on how much the lobster/crab weigh. Also, bring cash or a debit card. They don’t accept credit cards here.

I would definitely recommend coming here and getting the Maggi style lobster and the lobster roe fried rice.

Go to the restaurant if you..