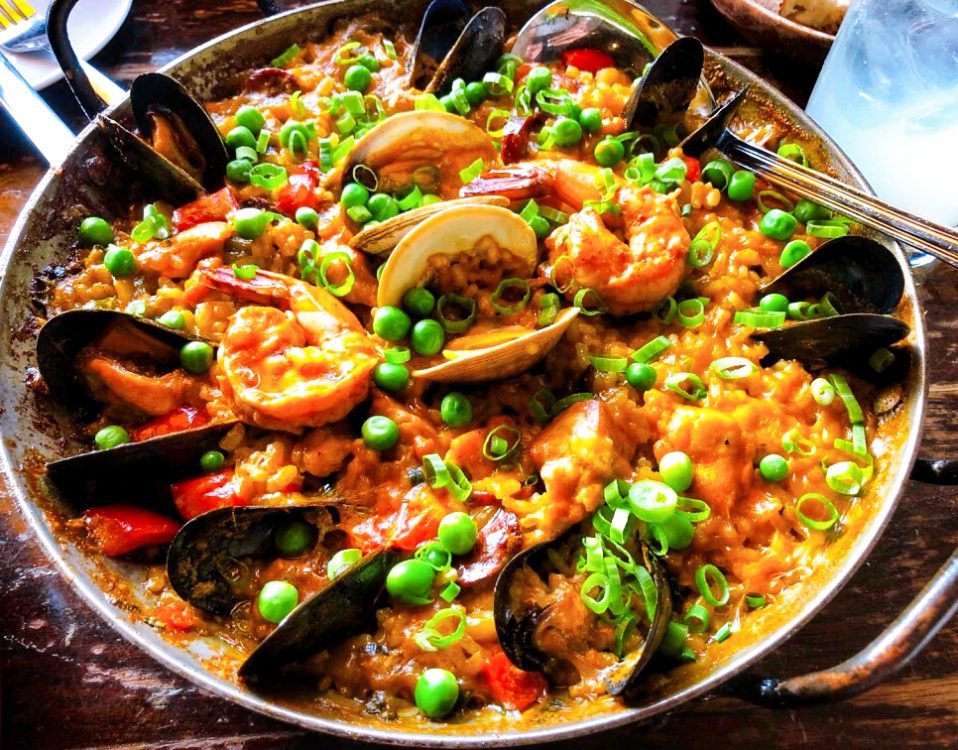 My last food post in Boston but this time, it’s all about seafood! I wrote a post about snack places in the city and also another that focuses solely on lobster dishes. For people who might not like lobsters but like other seafood, this one is for you.

I was never the biggest fan of Spanish food until Toro. I know paella is a famous Spanish rice dish but was indifferent towards it. When I saw that Toro’s paella Valenciana has both seafood and chicken, I had to try it.

I’m serious when I say that Toro’s paella is my favourite paella in the whole world. After trying it for the first time here, I can’t help but compare paellas at other Spanish restaurants. It can never compare. Toro all the way! I don’t love that the paella takes 45 minutes to cook. It’s not a big problem though because I’m usually with friends so we catch up and chat while we wait for our food. I’m willing to wait for good food.

When the server brings the paella out in a pan, we would wait for a bit and let the sauce settle in the rice before mixing it up and eating it. The pan is also burning hot so we wait for a bit so that it will cool down. The rice is moist and the pieces of chicken in the paella are really tender. I like the chicken more than the seafood. The paella serving is quite large because it’s for 4 people. I mostly come to Toro with one other person and we almost always have leftovers. It’s not a problem for us at all. I actually get excited that I can paella again the next day. My friends and I like to come here for dinnertime since it’s only open then.

Atlantic Fish has a special place in my heart because I ate here during my first visit to Boston. My family and I asked the concierge which restaurant she would recommend. She said Atlantic Fish but highly suggested to book a table in advance because the restaurant is booked at night all the time. Walking in and asking for a table could mean we have to wait for an hour. No thanks. Atlantic fish is a more dinner type of restaurant but they are also open during lunchtime. If you can’t book a table at night, I would suggest going in the daytime because it’s usually less busy.

I’m happy we listened to her because now it’s one of my favourite restaurants in Boston. If you ever see this (which I highly doubt), thank you for recommending this place!

It’s going to sound bizarre but listen, their bread is amazing. I’m talking about the free bread restaurants give while waiting for your food to come. A lot of restaurants serve free bread but I barely touch them because they’re usually cold. I would wait for my actual meal before I start eating. The exception is when the bread is warm. Then, I’ll eat some, for sure. Atlantic Fish have warm bread and it’s also crusty. I love it when I break a piece of bread off and I can hear all the crustiness of the bread. A part of me thought I was crazy for liking their bread so much but others who have been to the restaurant agree with me. I’ve even asked for seconds before!

As for an appetizer, I would go for their fried calamari. It practically melts in your mouth. They add cheese onto the calamari, which I thought was weird but hey, it works. I’m pretty picky when it comes to fried calamari. This dish is an option at many restaurants, trust me, I’ve tried so many but this one remains one of the best fried calamari I’ve had ever. The one thing I don’t like is the hot peppers. I would prefer it if the dish had calamari rings/tentacles only.

For the main course, I get the lobster ravioli, no hesitation. I love creamy kinds of pasta so this sauce is perfect for me. Sometimes, instead of slathering butter on my bread, I would dip it in this pasta sauce. They also have lobster ravioli as an appetizer but the portion size is too small for me. My stomach will always have room for certain foods all the time and one of them is lobster ravioli.

I’m going to start by saying Teriyaki House doesn’t have gourmet food and if that’s what you’re looking for, you should skip to the next restaurant. Instead, it’s comfort food. It’s also on the cheaper side. Out of all the restaurants on this list, this one is the cheapest and the one I would recommend the least. Eating out can be extremely expensive. I turn to Teriyaki House when I still want to restaurant food but don’t want to pay a lot of money. I will always associate this restaurant with my college life because I ate it pretty often then – either through delivery or in-person.

My go-to is their teriyaki salmon and shrimp tempura. Their teriyaki sauce is thick so it’s good for mixing it with white rice. I don’t like drowning my rice in the sauce. They don’t pour a lot on their salmon and rice, which I enjoy. With their entrée, you have the option of choosing steamed rice or brown rice. For an extra $0.50, you can upgrade to fried rice or noodles instead. I also like their shrimp tempura. When it comes to shrimp tempura, I’m not that picky. Fried shrimp is always good, okay? There’s something about the way Teriyaki House makes them though. It’s crispy and cheap. Good enough.

Last but not least is Basho. Again, it’s another restaurant in the Fenway area. As you saw in my previous post about Boston restaurants, Fenway has really good restaurants.

Their crispy shrimp is something to try. In some way, it reminds me of Toro’s garlic shrimp. I would say that Basho’s crispy shrimp has thicker breading. It’s also a bit spicier because they use spicy mayo as a sauce. They’re both delicious in their own way.

The snow mountain roll is a sushi roll that has shrimp tempura inside with crabmeat on top. It looks like a little tower. Instead of dipping the roll in soy sauce, I dip it in spicy mayo. I have to pay extra for the spicy mayo but it doesn’t matter to me. I’ve tried eating their snow mountain roll without spicy mayo and it simply does not taste the same without it.

ANDDDD that’s a wrap! My last post about food in Boston! If you haven’t noticed by now, every single restaurant I wrote about in Boston has at least one seafood dish I like. Boston isn’t playing around when it comes to their seafood. If you’re like me and adore seafood, Boston is the right place for you.

I’m sorry for barely having any photos in this post. I will be better going forward, I promise!

Which one sounds the most appetizing?

If you’re in Toronto anytime soon, check out some places to eat at for good Asian food or pasta as well.